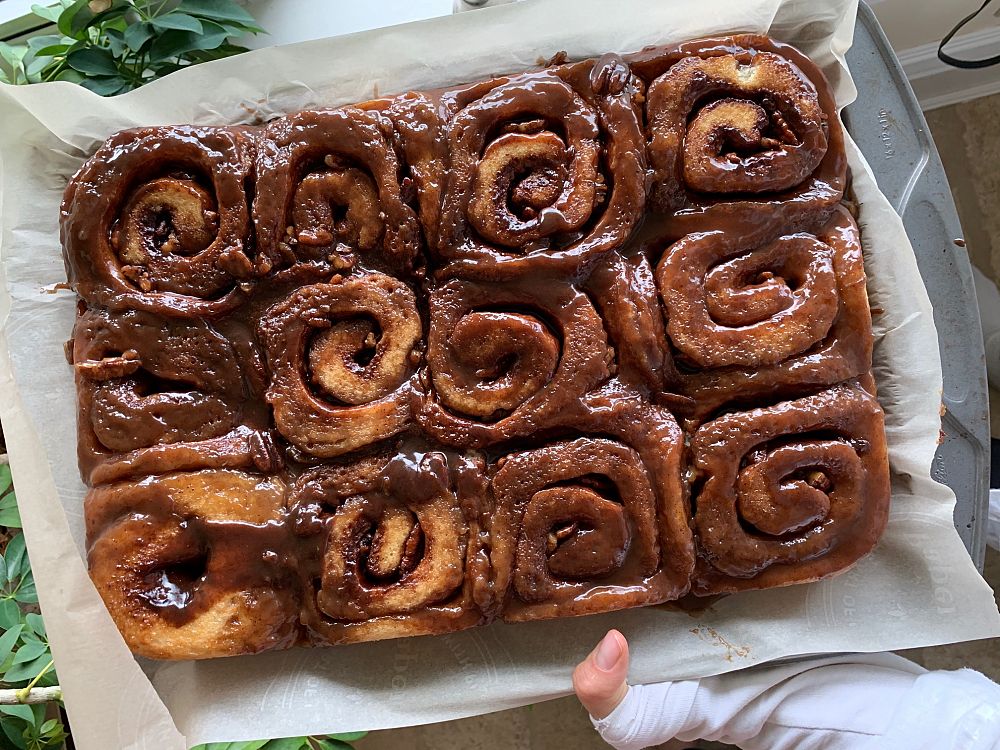 Introducing, the most incredible, soft, gooey cinnamon buns you have ever met!! And, huge bonus, they’re 100% plant-based and cruelty-free!!

If you follow my Insta-stories, you may have noticed me *dying* over these on the weekend. Three of the To Die For ladies and I took a road trip to the Okanagan to visit a trio of newly rescued dairy calves at Critteraid Farm Sanctuary and we got to spend some quality time with our friends Dan and Sheanne of Indian Rock Vegans who so graciously hosted us for the weekend.

It’s an understatement to say that we were all blown away by the breakfast they served us on Sunday morning, Sheanne’s homemade cinnamon buns being the highlight. We couldn’t get over how soft and almost doughy their texture was. And the pear cream in place of icing was a hit. Cinnamon buns are rich enough — a lighter option like Sheanne’s pear cashew cream was the perfect pairing.

Lucky for all of us, Sheanne has so generously shared her recipe with us!! Huge thanks to has as the recipe had never even been written down before! It was in her head and on scraps of paper and old receipts around the house!! Thank you Sheanne for taking the time!! Also, you must read her ‘vegan story’ here that she shared in the documentary, Eating You Alive. Sheanne lost 133 lbs on a whole food plant-based diet and gained a whole new perspective on life! Her story is amazingly inspiring. Anyways, I promise you will not regret making these. Try them this weekend and please tag us so we can see your creations! @IndianRockVegans @ErinIreland

For the yeast mixture:
For the dough:
For the filling:
For the pan sauce:
For the pear cream / icing (healthier than vegan cream cheese icing!):

For the pan sauce:

For the pear cream (which you can make ahead as it’s best serve chilled):

Back to the dough!

Remove from oven, loosen the sides with a knife and then place your serving platter (or rimmed baking sheet lined with parchment) over the pan, then carefully and quickly flip the cinnamon buns over onto the platter. Serve warm with pear cream.

Add your own review

I love these buns

My first time making this recipe didn’t go to plan, the sauce did not thicken and they had to be cooked for double the stated time before the dough was cooked through. I have now made this recipe multiple times and found the only way to get the results stated is to cook in a cast iron dish and use full fat coconut cream. This is now my favourite bun recipe and a house favourite!

A bit more time in the oven = perfection

I made these cinnamon buns (again) yesterday and baked them off this morning.
Did they go perfectly according to the recipe? No.
Where did I go wrong?
1. I think it’s important that they be fully at room temperature before baking. For me, this would have taken longer than 30 minutes.
2. I used a stoneware baking dish which is slow to change temperature. As a result, the cinnamon buns took about 45 minutes in the oven rather than 25.
What I love about these cinnamon buns is that they are not overly sweet. They are ooey, gooey and delicious.

We’ve made these several times and they’re absolutely delicious! Reading through the comments, YES, only use the white coconut cream from the top of the can. You can chill the whole cans in the fridge for a bit before you open them. This will help solidify the cream.
This recipe makes a lot. As in two pans for us!
Also, don’t use all the juice from the pears if you want thicker icing. I’m sure they’re different depending on the brand, so adjust as you go.

Same here. The result was a mess and had nothing in common with the pretty buns in the picture. They did not even taste good. We had to throw it away. It’s so sad. This was really a waste of time and food. I wish I had read the comments before.

I’ve made this recipe a handful of times now. The pan sauce is liquidy, BUT I also have to use two trays to fit all the buns so split into two portions works! The flip is definitely key to help all the sauce drain. Super sticky once cooled and delish!!!!